Seattle Seahawks General Manager John Schneider signed an extension to keep him in the Pacific Northwest through the 2027 season. Under the partnership between him and head coach Pete Carroll, the Seahawks have enjoyed the highest level of sustained success in franchise history, bringing the franchise its only Lombardi trophy in the process.

But there are some deep, seedy corners of the internet where all is not sunshine and rainbows. To some, John Schneider has been living off of a reputation gained nearly a decade ago, with little to show for his efforts since then.

On the surface, there is merit to this argument. In 2011, Schneider spent day 3 picks on future Hall of Famer Richard Sherman and the perennially underrated KJ Wright, not to mention future Super Bowl MVP Malcolm Smith. He followed that up with the legendary 2012 class that netted the Seahawks Bruce Irvin, Bobby Wagner, Jeremy Lane, and of course, Russell Wilson.

Then he followed that up in 2013 with a draft whose biggest contributor was…Luke Willson? Tharold Simon? Christine Michael was a bust and you could still make an argument that he was the most successful player from this draft.

It’s possible to back up whatever your prior belief in John Schneider happens to be by judging his hits and misses in the draft, but oftentimes a key component that’s missing is how well Schneider drafts relative to the rest of the NFL. There simply aren’t enough players of the 2012 caliber for one team to hit on in each draft. Your 5th round cornerback is a lot more likely to become Mark LeGree than Richard Sherman. The real question is whether or not John Schneider can find these players more often than the rest of the NFL.

There are two main obstacles to overcome when attempting to break this down:

The first one is actually somewhat simple. During his time with the Dallas Cowboys, Jimmy Johnson developed a draft value chart, assigning point values to each pick in the draft. The Jimmy Johnson trade value chart has been kicking around the NFL ever since. 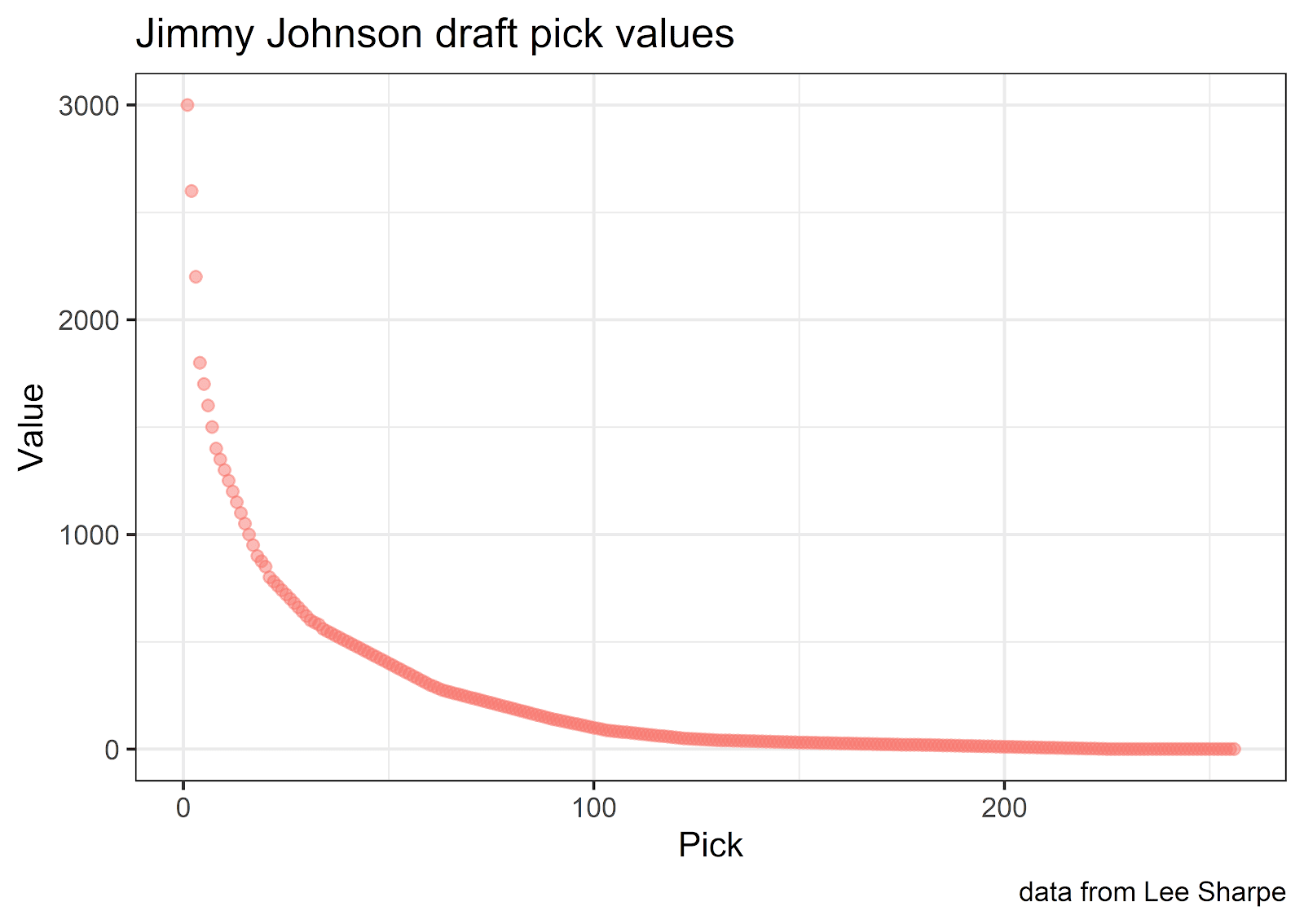 The JJ value chart is not the only attempt at placing value on draft picks, but it is the most common. Chase Stuart of Football Perspective has his own version, as do the folks over at overthecap.com. They all do reach a similar conclusion regarding the shape of the above chart, that the topmost picks should carry far more weight than picks on day three. 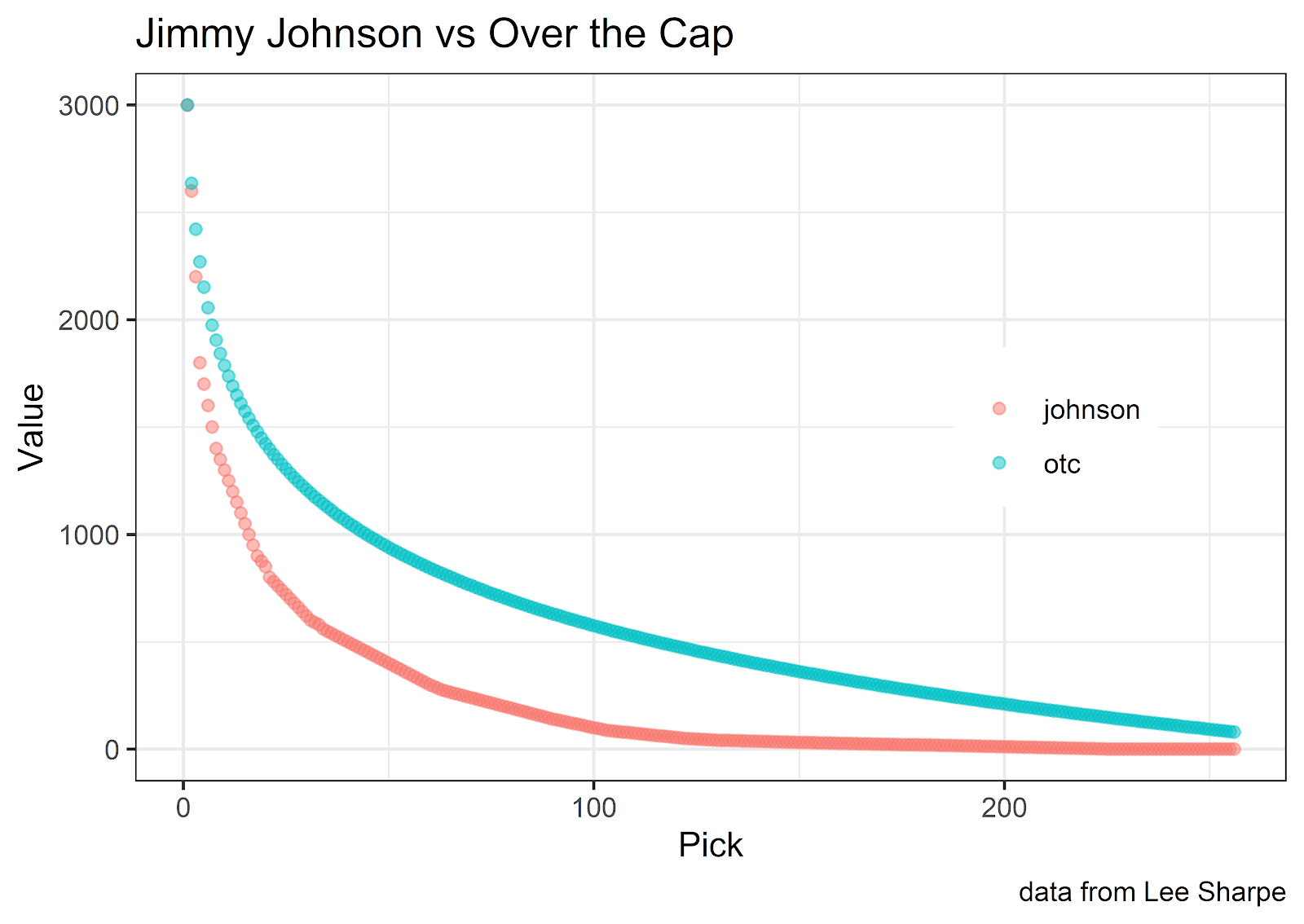 For the purposes of this article, I’m going to use the draft values from Over the Cap, as they correlate better with the metric we’ll be using to solve obstacle number two.

How do we grade the production of each teams’ draft classes as objectively as possible? Initially my thought was that perhaps PFF grades could be of help here, as they have a constant range across positions, but they don’t take into account how much someone played. For example: The second highest graded rookie defender in 2020 was the Cowboys’ Bradlee Anae, who ammasses just 6 snaps across 3 games. We don’t want to count that as a better than, say, the Bucs’ Antoine Winfield Jr., who started all 16 games at safety for Tampa Bay. In order to capture a better representation of the actual value a draft pick added, we need (and I can’t believe I’m saying this) a volume statistic. The two components to on-field contribution are how well you play and how much you play. For that reason, PFF grade is out.

There is PFF Wins Above Replacement (WAR), which does meet our qualifications of judging a player’s ability and his contributions, but to my knowledge that is unavailable to the general public. The folks that developed nflfastR created their own WAR metric, but it only evaluates offensive skill position players, leaving us in the dark on over half of our draft picks. That’s out too.

What about something easily accessible to anyone? Over at Pro Football Reference, they track a statistic called Approximate Value (AV). This metric is derived from the points scored and allowed by each team in a given year, which is scaled evenly and distributed among the players based on play time. That means it meets both of our requirements, rewarding players who play more often and whose teams score more (or allow fewer) points because of it. It’s far from a perfect metric, but it captures player value in a way that works for this study and in a way that passes the smell test when you go look at a list of the top-rated players by AV. 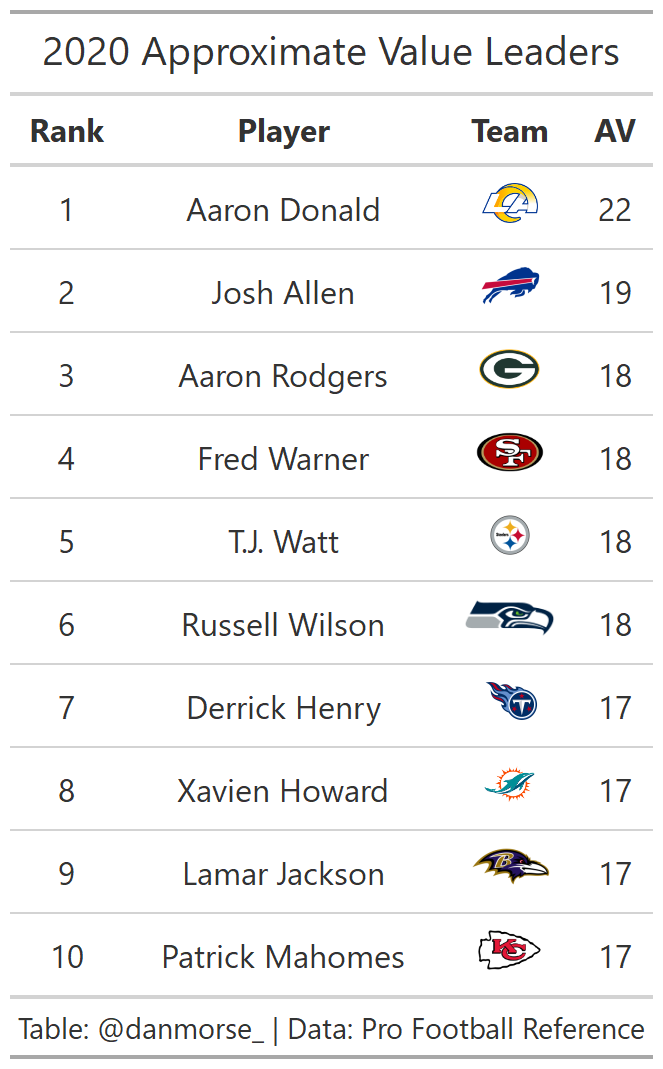 This year, it featured five quarterbacks, agreeing with the general consensus that quarterback is the most valuable position in football. But it also featured four defensive players in the same range, along with Derrick Henry. Again, it’s not perfect, and may not line up with your feelings about running back value, but it does in effect tell us which players were the most useful to their team.

For this study, I gathered Pro Football Reference data from every draft since 2000. Starting with the 2005 draft, I created a simple linear model to predict the AV of each draft slot based on the five most recent prior drafts. I also included the players’ position groups in order to capture a bit more variance in the AV, and the “potential games” since they were drafted (i.e. players drafted in 2018 could have played at most 48 regular season games, capping their AV). We can then compare their predicted AVs to their observed AVs and use that to gauge if a draft was more or less successful than we should expect based on how high or low a team’s picks were. Here are the most successful draft classes in the NFL in the John Schneider era (2010-2020) in terms of their Approximate Value Over Expectation (AVOE).

The Seahawks’ first three years under the John Schneider/Pete Carroll regime all rank in the top-10 draft classes of this era, with the 2012 and 2011 classes blowing most of the field away. The 2010 class being on here is a pretty impressive feat as well, considering it had the highest predicted AV of any Schneider draft. Hitting on both first round picks (Earl Thomas, Russell Okung) and tacking on Golden Tate in the 2nd as well as Kam Chancellor in the 5th was just enough to get it into the top 10.

But of course, nobody is arguing that those weren’t historically successful drafts. What we really want to know is what Schneider has done for us lately. Here is every Seahawks draft from 2010 on, including where they ranked each season relative to the rest of the NFL in terms of AVOE.

The 2013 class really was as bad as you think, but it might not have been the worst in the NFL. That honor goes to the Cleveland Browns, whose most productive player from that draft was none other than Barkevious Mingo, taken 6th overall.

Since then, the Seahawks did have one more draft that was quite successful relative to the rest of the league. That was the 2015 class that featured Tyler Lockett and Frank Clark, along with an NFL-caliber guard in Mark Glowinski.

Looking at every year since 2012, the Seahawks are on average the 16th ranked team in terms of AVOE. Almost perfectly average. Is John Schneider a demigod when it comes to the draft? Well, no, he hasn’t been much better or worse than any other GM since 2012. Is John Schneider actually terrible at evaluating NFL talent in the draft, and just got lucky in 2012? Well, no, at least not any worse than about half the teams in the NFL.

Lifelong sports fan, writes about football, watching the tape and looking at the stats are not mutually exclusive View all posts by Dan Morse