DK Metcalf was never supposed to be a complete wideout. When the Seattle Seahawks selected him with the 64th pick in the 2019 NFL Draft, they knew they were getting a freak athlete and consummate deep threat. But did he have what it takes to learn the nuances of the wide receiver position?

The consensus belief was that no, he did not; Metcalf’s subsequent plummet to the very bottom of the second round was understandable at the time. A relatively unproductive receiver that only ran hitches and streaks from the left side of the field certainly has his place in the NFL, but doesn’t sound like a risk that teams are willing to gamble a first-round pick on.

The Seahawks were certainly fortunate that Metcalf’s collegiate career provided more questions than answers. Pairing arguably the best deep thrower in football with a mammoth that is way faster than all the other mammoths and possesses eye-popping abdominals, each of whom has its own personal zip code, seemed like a good idea at the time. It seems even better now. Through the first five games of 2019, Metcalf proved that his athleticism and big play ability translated seamlessly to the pros, racking up 12 receptions for 267 yards and 2 touchdowns of 28 and 40 yards, respectively.

But it is what Metcalf showed on Sunday against the Cleveland Browns that excites the most. On five targets, Seattle’s speedy behemoth caught four passes for sixty nice nine yards, each reception more impressive than the one preceding.

DK’s first catch came on a 3rd and 2 during the Seahawks’ first drive of the game:

Metcalf gets off the line well and gains instant separation on a slant, no doubt partially due to the corner’s paralyzing fear of getting dunked on deep. He is instead dunked on underneath, as DK veers to the left, breaks a sorry excuse for an attempted tackle, and dismisses Demarious Randall with an arm almost as stiff as onlooking Seahawks fans. It turns out that getting the ball to your uber-athletic playmaker in space is actually good. Who could’ve guessed?

Brian Schottenheimer took this realization and passed with it, much to the chagrin of those who have (much of the time rightfully) criticized him for giving up on drives as soon as Seattle is forced off schedule:

Russell Wilson fakes the pitch to Chris Carson as Metcalf runs a shallow crosser. A simple toss leads to an easy conversion, allowing Seattle another chance to fuck up the ensuing set of downs. What makes this snap so enticing is less about what Metcalf does and more about how his coaches are utilizing him. Again, and I may be going out on a limb here, throwing the ball to the big fast man with room to run seems pretty effective.

While Metcalf’s next catch was on an uncontested comeback, the rookie’s technique and awareness are enthralling when taking his perceived weaknesses into consideration:

Just look at how crisp this reception is — and on the right side of the field no less! Metcalf’s route chart from the first four weeks of 2019 (we shall exclude the Rams because, of course, fuck them)…

DK Metcalf's route chart from #NextGenStats is pretty unique… every route run except one has been from the left side and they are all pretty much north-south #Seahawks pic.twitter.com/PLdLyBSAt1

…looks exactly how one would’ve expected before the season began. And while one reception is nothing to lose your mind about, I lost my mind because of this one reception — simply for the sake of refuting the #narratives.

DK’s best catch of the day was his last, and all but sealed the win for Seattle:

There is an argument to be made that this was actually an incomplete pass but I refuse to acknowledge it (even though I literally just acknowledged it). Metcalf takes an outside release and runs a curl, which is a hilarious route descriptor when the receiver supposedly can’t change direction. Russell Wilson’s trust in his rookie wideout is apparent, and he delivers the ball right on time to convert from 3rd and 7.

Wilson has targeted DK early and often through six weeks, and while this has resulted in a paltry catch percentage of 51.6%, both the receiver’s clear growth and 10.8 yards per attempt speak volumes; there is no doubt in my mind that one or both of these numbers will grow as the season continues on.

Though Metcalf was drafted to be a top notch deep threat — and he has produced exceptionally well in this capacity — he looked the part of a physically-gifted possession receiver against the Browns. His route chart from Sunday, in contrast to the one above, is encompassed by 50% YAC, 50% finesse, and 100% ambidexterity, which is fitting because Metcalf is 200% the size of his fellow receivers. 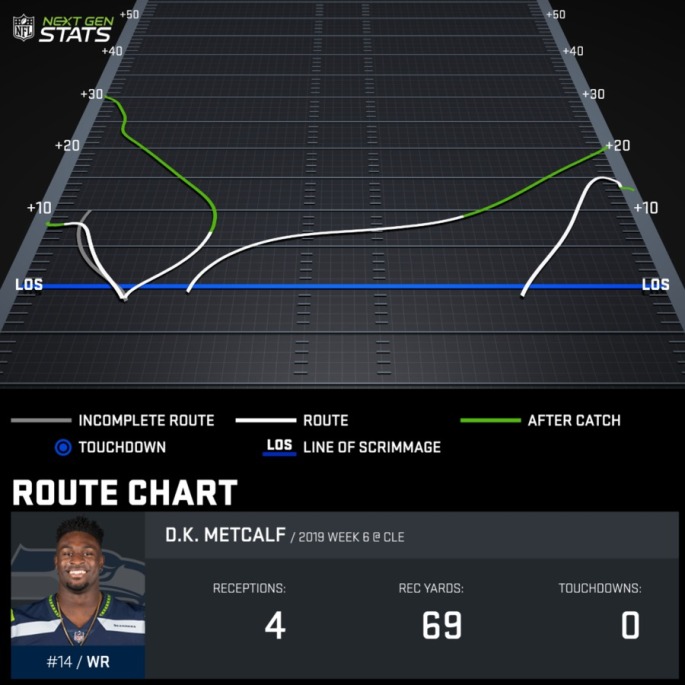 The volume isn’t necessarily there, but it never really is for receivers in Seattle. DK’s usage is expanding, as are his abilities.

There is no reason to expect that, barring injury, Metcalf won’t continue to thrive as deep threat in a Seahawks offense seemingly tailor-made for his skill set. If he can continue to develop the traits he showcased in Cleveland, may the gods have mercy on all those who dare oppose.