Throughout the Pete Carroll/Russell Wilson era, the Seattle Seahawks’ receiving room has undergone some drastic changes. First arrived Sidney Rice, Russell’s first love affair with a wideout. Rice generously gave up his own well-being countless times — most notably in an overtime win against the Bears — so that Russ could shine. Then came Golden Tate, or as he’s more commonly known, the Guy That John Schneider Should Have Paid. Following his departure, Doug Baldwin, the only man capable of breaking my ankles through the television screen, had established himself. It is and has been his receiving corps since 2014.

Enter George Fant, the 6’5” 322 lb “left tackle“ that took the world by storm during Monday Night Football. Wunderkind Brian Schottenheimer has been teasing us all season long by lining him up out wide, creating some of the strangest mismatches I’ve ever seen in a football game.

Seahawks OL George Fant going up against Richard Sherman is all sorts of disrespectful 😂 pic.twitter.com/QSydzsKx07

Seahawks fans have been agonizing over this as much as Sirius Black harrowing over revenge on Peter Pettigrew. 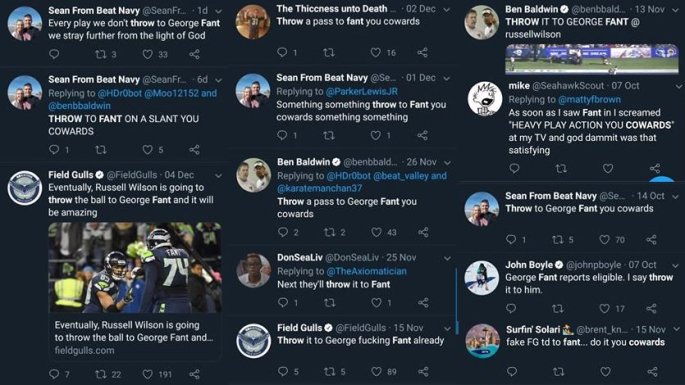 We did our waiting. Twelve weeks of it. And in Week 13, we were finally able to witness the big man catch his first NFL pass. Fant went rumbling, bumbling, and yes, stumbling towards the first down marker after running a pristine out route to the flat.

Linebacker Ben Gedeon lucked into Fant tripping over himself there, because he’d have about as good of a chance to tackle that beast as he would trying to bring down Knickers the big cow. I am udderly convinced that Fant would have taken that ball to the house if the turf monster hadn’t caught hold of his foot.

We all rejoiced when the Seahawks finally cut Tom Cable over the offseason. They also got rid of Darrell Bevell (who did nothing wrong), and it looked as though they were finally going to build a team around their star quarterback. Maybe they’d even bring in offensive genius John DeFilippo!

But alas, Pete instead got extremely back on his bullshit, and hired Brian Schottenheimer. Schotty came in with the sterling record of having been OC for both the Mark Sanchez Jets and the Jeff Fisher Rams.

Pete doubled down on his run-first philosophy, ignoring all the analytics nerds yelling at him about how this is a passing league now. “I’m sorry,” Pete responded, “I can’t hear you over the sound of all these BODY BLOWS.”

George Fant is the prototypical wide receiver for a team that loves running the ball 42 times per game, as they did on Monday night. When Chris Carson bursts through the line and starts making his way downfield, do you want to see Tyler Lockett out in front trying to block someone? No. When Rashaad Penny bounces a run outside, then cuts it back and forth approximately 14 times only to find open field in front of him, do you want Jaron Brown as his lead blocker? I doubt it.

Or would you rather have the enormous yet graceful figure of George Fant leading the way, bowling people over?

The Hawks are going to run the ball whether we like it or not, which means the receivers’ run blocking ability is going to have more impact on the game than it would on another team.

— On a completely unrelated note, I can’t wait until Fant becomes the best #88 in Seahawks history next season. — (Editor’s Note: How dare you)

David Moore has the potential.

Tyler Lockett has been worth every penny of his contract, as I’ve often said.

Doug Baldwin has the pedigree.

But George Fant is the hero the Seahawks need.

Posting for the future pic.twitter.com/1eGzqyfFmg

Lifelong sports fan, writes about football, watching the tape and looking at the stats are not mutually exclusive View all posts by Dan Morse