I am about to type a sentence; it is a good sentence and I am excited to type it.

That was exciting. Both typing the sentence and watching the Seattle Seahawks play a football game last night.

Since the Seattle Seahawks played a football game last night, we’re going to start something up on the Beast Bloge that might be a weekly thing and just as likely might not be because we like to keep you fuckers on your toes: THE T*STEFUL ROUNDUP.

Contributors, guest-posters, and all sorts of rascals from the Bloge will write up a brief chunk of text discussing their thoughts from the previous night’s game. It will likely be a combination of humor, insight, knowledge, ineptitude, and everything in between.

Enjoy these words from all of these nerds.

Brian Schottenheimer was all over the field tonight. He definitely had a mixed-bag sort of day by holding up well in the trenches, creating some solid pockets for Russ and Davis, and opening up some decent running lanes for Carson and Penny.

However, he made a critical error in throwing an interception from the 5-yard line. I don’t love showing this play off to other teams this early in the preseason, especially when it was executed so flawlessly.

David Moore, Seattle’s 7th-round pick a year ago, had a nice game until he was torpedoed by Shamarko Thomas. He went up and caught a deep pass from Davis and then hauled in a quick curl (maybe, I’m not an expert) for 5-6 yards from McGough when the Seahawks needed some breathing room. On the play that he was injured (from an atrocious hit by Thomas), he had more cushion than a La-Z-Boy. He would have hauled in another big gain if the ball was on target. I don’t know if he even makes the team’s opening day roster, but if (when) injuries hit the WR corps, he could be an unsung hero making some of those 3rd/4th-read catches that keep drives going.

With starting Defensive End Frank Clark out tonight as a precaution, Jacob Martin made the most of his reps, flashing serious capability on the edge. The rookie recorded a couple tackles, a half-sack & multiple pressures. As the team looks to identify their “Cheetah” package pass rushers, perhaps the 5th-rounder from Temple has put himself ahead of the pack for now. Pete Carroll raved about Jacob in camp and mentioned him in his post-game presser as a notable rookie contributor along with the likes of Rasheem Green and Shaquem Griffin. Can Jacob keep the team from adding a veteran free agent? He’ll certainly need to build off of this performance, but he has made a good first impression.

The Seahawks may have dodged a bullet on the initial diagnoses of Isaiah Battle and Jamarco Jones. Pete says both guys appear to have sprains – Jamarco his ankle and Isaiah his knee. With both guys battling at right tackle, Germain Ifedi appears to have nobody to compete with other than George Fant and Rees Odhiambo, who are both “left side guys”. With little info at this point to the severity of these injuries, keep an eye out for any transactions made in the next week. Avery Young, who was waived during the Sweezy acquisition, may be getting a call to come back if either of the tackles aren’t healthy enough to finish the preseason. In my opinion, it’s time to see if Fant can swing to the right side, though the team may have different thoughts.

Earlier this week, we picked Chris Carson, the once and future RB1, as an early stan candidate, or standidate. Carson showed out in limited action against the Colts.

His crowning moment was late in the Seahawks’ first drive, when the second-year back hit a jump cut then nailed a spin move to finish the run. Carson looks to be the early favorite to start Week 1 and bring both the thunder and lightning the Seahawks run game has desperately needed.

Classic rock flows out of the speakers as the Mariners take the field with an 8-2 lead. My drink is cold, the fries are crisp, and all is right with the world.

But wait! There’s a hubbub at the bar, and…are people banging on the tables? The volume of this once-sleepy neighborhood haunt grows, and then the crowd roars.

Except it’s not the crowd in the bar, it’s the crowd at CenturyLink Field, the live broadcast now reverberating through the aforementioned speakers. I slink off to the dingy corner, where the smallest TV has been relegated to the baseball game.

Jean Segura doubles! Announcer 1 remarks, “Danger’s just so good at thinking on his feet,” as the camera pans to a man on the sidelines, helmet in hand, who, admittedly, is indeed standing on two feet with an earnestly thoughtful expression on his face.

James Paxton walks Jake Marisnick to load the bases, while a man three times Jake’s size catches the ball in the end zone. The bar erupts. “You just got HAWKED,” hollers a man at the nearby table. Pax gives up a bloop RBI single. Thunderous applause echoes through the bar. The kick was good.

Between the dizzying and spectacular punts of Michael Dickson, I sat and thought about who most impressed me last night. I love kicking, but I can’t be shoving Dickson down your throat. Griffin was great as well, but I’m pretty sure someone else is going to mention him.

So, I’m picking Justin Coleman. His pass defensed in the first quarter was a beauty; to smack away Andrew Luck’s noodle-armed attempt at T.Y. Hilton gave me goosebumps. Rasheem Green was another big standout. A couple of big sacks show that he could be quite the asset going forward in the post-Michael Bennett age.

All in all, I’m pretty excited, and yes about more than just punting.

My support of Dick’s Drive-In is well documented by many on the web. My dedication to the elite echelon of quality is unsurpassed. Dick’s is to burgers as Walter Thurmond III is to snazzy outerwear. 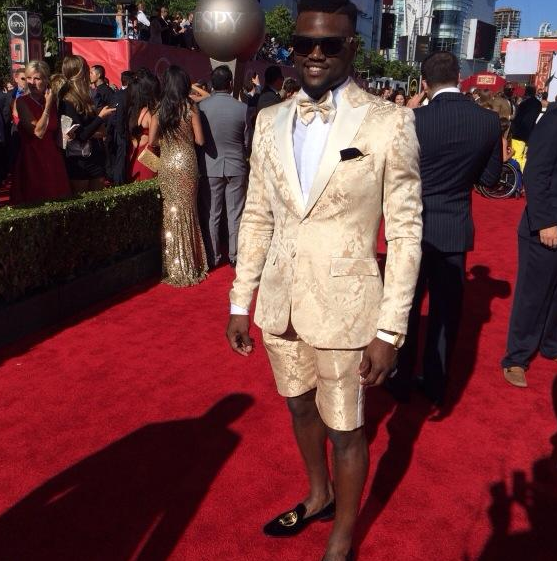 They are both flawless.

What I’m trying to say is that I fucking love Walter Thurmond and I will forever hold him near and dear to my heart despite that moment where Colin Kaepernick made the same throw over him in the NFC Championship that Kam Chancellor intercepted except instead of intercepting it he let Michael Crabtree catch it and run for a big first down on the game’s final drive.

Okay, what I’m actually trying to say is that Justin Coleman is the best nickel corner that Pete Carroll has had in Seattle, which is some seriously high praise. Coleman cleaned up a play in the backfield after Bradley McDougald got there first and then had a beautiful pass defensed just moments later. If JC can make me venture as close as I would ever dare to criticizing WT3, what can’t he do?

One line from Seahawks aficionado Spike Friedman that stuck with me while watching Rasheem Green in his first live pro action: “he was miscast at USC.” That’s a bold statement, but not as bold as Green’s debut, with all the tackles (7), the sacks (1.5), and the seeming maturity of a veteran, with veteran poise and veteran moves.

He’s a rookie. He’s, um, green. But maybe for the first time in a few years, instead of having to play at defensive tackle where his 6-4, 275-pound frame didn’t exactly belong, he gets to belong right where he’s playing. As a havoc-wreaker on a defensive line that needs him badly.

I figured he wouldn’t be much of a factor for our pass-rush-thin Seahawks until 2019. Couple more preseason games like this and people are gonna start figuring differently. Like me. Me people.

Hot take translation: he looks like a raw Michael Bennett.